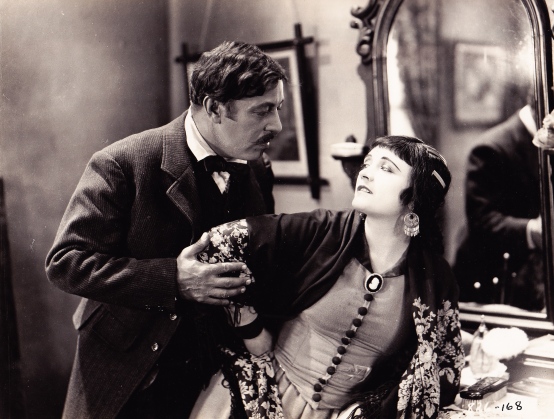 Pola Negri and Warner Oland in a scene from “Flower of Night,” Paramount, 1925.

Here is another photo from the long lost–although not necessarily lamented–“Flower of Night.”   Warner Oland, of course, was a Swedish actor best known for his role as “Charlie Chan” in the 1930’s, although here he’s playing a brutal foreman of the mine stolen from Pola’s family by swindlers.  He attempts to sexually assault her at a dance, yet dies of a heart attack, causing a scandal that sends Miss Negri’s character fleeing to San Francisco where she becomes a dance hall girl and…well, it’s not the most interesting plot for one of her films.   Have to love her look, though, and the self-confidence she exudes in this shot.  Strong woman.  Kinda hot, me thinks.